For close to 10 years, between the mid-1990s and mid-2000, two journalists who also happened to be serious Christ followers, were involved in the Ottawa media scene. One was the late Bob Harvey, who was faith/ethics writer for the Ottawa Citizen. The other was Lloyd Mackey, who wrote about the Ottawa political and government scene for a range of Christian faith-based publications and web sites across Canada. 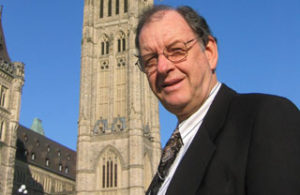 Bob and Lloyd got to know each other and would often meet to consult, collaborate and some might say to “conspire” in identifying stories that would be of interest to their respective readers: Bob’s being those who read the news pages of the Citizen and its sister mainstream newspapers across Canada, and Lloyd’s being more specifically faith-based, in various streams of the Christian mileau.

Bob and Lloyd were jointly presented with the Leslie K. Tarr award for lifetime achievement at Write Canada in 2006. Bob passed away in 2014 after several years of ill health. Lloyd is living with his wife, Edna, in Surrey, BC, enjoying an active retirement.

The Harvey/Mackey Award seeks to recognize and encourage excellence in journalism from a Christian worldview. Journalists gather, fact check, interpret and objectively report on current issues and people. Journalism can hold leaders accountability, distribute news of interest, and add a Christian voice to Canadian media.

This award celebrates the best of Canada’s up and coming Christian journalists. This award is meant to encourage and support those who are new to journalism and have never before won an award for their work.

Each entry is judged independently of the article category, so the winner of the Harvey/Mackey Award may or may not win the award they are shortlisted for.

** The piece must be a journalism piece. Wiki defines journalism as: The reporting on and interactions between events, facts, ideas, and people that are the “news of the day” and that informs society to at least some degree.**